The just-published 5th-annual Burtch Works Study: Salaries of Data Scientists provides fresh insights into the compensation trends for those holding the sexiest job of the 21st century: 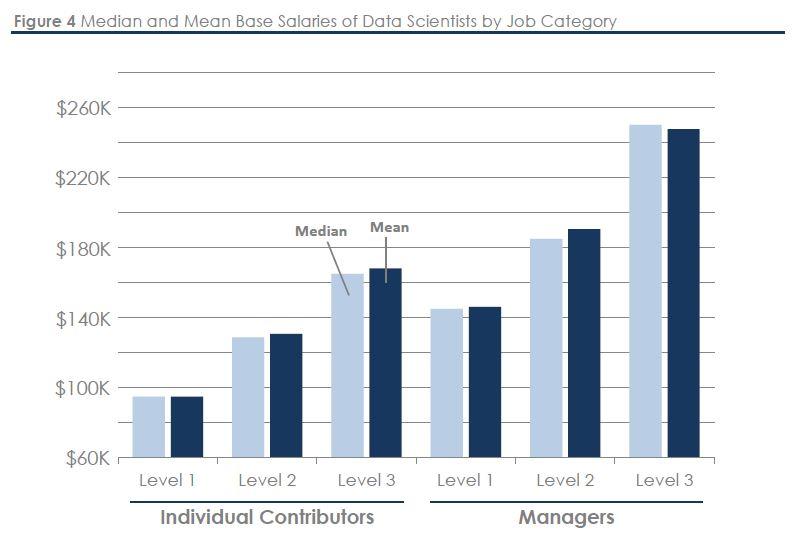 Sexy salaries attract new entrants into a new profession and a new profession evolves to accommodate the increasing demand for its services. There has been a shift to requiring Master’s degrees instead of PhD’s which in turn helped drive the proliferation of data science Master’s programs. The pool of available data scientists has increased due to the influx of existing statisticians and analytics professionals upgrading their skills (and their job descriptions) and newly-minted graduates of data science educational programs (including many online courses).

The supply of data scientists has increased, but so has the demand. As a result, salary growth has moderated but the salaries offered to data scientists still remain at the “sexiest” level. Confirming the Burtch study in this regard, is an analysis conducted by Web data provider PromptCloud, exclusive to Pressed Data. Analyzing job listings for data scientists on Dice.com in July 2017 and March 2018, PromptCloud has found that the average salary offered has increased 6.43%. 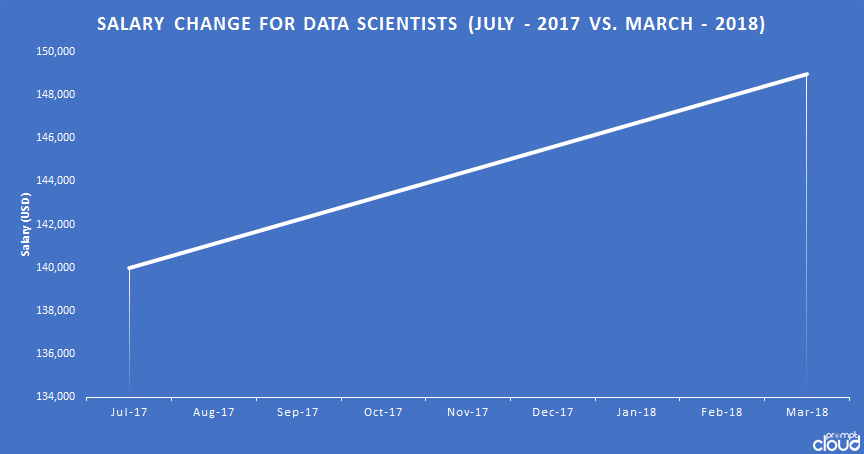 The job listings also confirm the Burtch study’s contention that data scientists are distinguished from other analytics professionals by their coding proficiency. An analysis of the required skills listed in these jobs descriptions shows that the Python programming language leads by a wide margin other popular statistical analysis, data management, and coding tools. 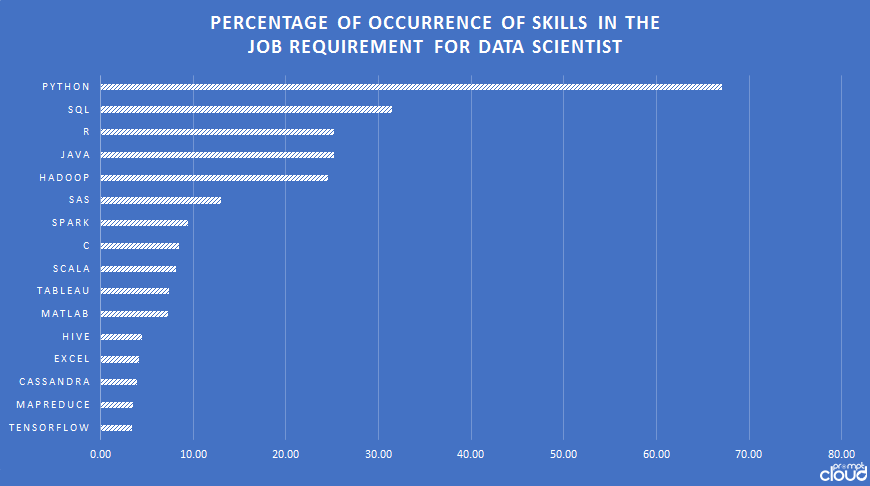 Python was first implemented in the late 1980s, but it was its 3rd version, released 10 years ago, that became—with the rise of “big data”—a widely popular tool among data scientists. Computer programming skills, especially in Python, contributed to the emerging definition and institutionalization of the new discipline, and with it, specialized training programs and how they were differentiated from their immediate predecessors, the “business analytics” programs.

One such new program was the Master of Data Science program at the Illinois Institute of Technology (IIT). Shlomo Argamon, Professor of Computer Science at IIT and director of the program from its inception five years ago, has also observed the broadening of both the demand for and the supply of data scientists. Says Argamon:

“The awareness of the usefulness of data science has grown, and as tools become more widely available, companies in a greater variety of industries are making use of data scientists, either in-house or via a growing number of data science consulting firms.”

And as the Burtch study also noted, Argamon has increasingly seen the graduates of the IIT program finding employment not only with tech firms and data science consultancies, but also “in a wide variety of industries such as insurance, media, manufacturing, banking, and more.” And he adds: “I should note that, despite the hype, it seems that most firms understand that they cannot just plug in some tools and expect results, that they need actual data scientists to get the insights they seek.”

The increase in the diversity of employment opportunities has been matched by the increasingly varied background of the people entering the data science profession. Argamon: “We’ve always sought a diversity of backgrounds among our students, as we see that as strengthening the learning experience for budding data scientists – our goal is to produce well-rounded data scientists who can effectively communicate with both technical and non-technical colleagues and clients, and who can learn new domains and collaborate with diverse experts.”

Over the last five years, Argamon has observed the growing attraction of data science to entrants from many different disciplines and experiences: “While our earliest students were almost entirely from computer science, engineering, and statistics backgrounds, we have seen growth in the numbers of our incoming students from other backgrounds, with majors such as business, history, biology, chemistry, economics, and anthropology. These different ways of thinking, we believe, will contribute to the breadth and effectiveness of these students and others in their cohort as data scientists.”

At IIT, as in similar data science programs, an integral part of the curriculum is practical experience. In addition to putting to test in real-life situations what they have learned in the classroom, these experiences highlight to the students (and would-be students) the value of data science for business and society.

In 2016, IIT’s basketball coach, Todd Kelly, turned to the data science program for help in what was probably the very first use of Moneyball-type methods in Division III sports. In 2013, IIT’s record was 0-25 and the next year, Kelly’s first as a coach, it improved to 2-23. After two IIT data science students spent the summer of 2016 collecting and analyzing data about the team, the IIT Scarlet Hawks finished the next season with a 22-6 record, making it all the way to the U.S. Collegiate Athletic Association Division 1 National Basketball Championship.

This kind of results make data scientists happy about the work they do. A recent KDnuggets job satisfaction survey found “that while Data Scientist may no longer be the sexiest profession, it is still very satisfying.” The jobs with the highest satisfaction, KDnuggets reports, are Machine Learning Engineer, Researcher/ Professor, and Data Scientist/Statistician. Is this a leading indicator that “machine learning” is the next “data science” in terms of sexiest salaries, satisfaction, and skill shortage? 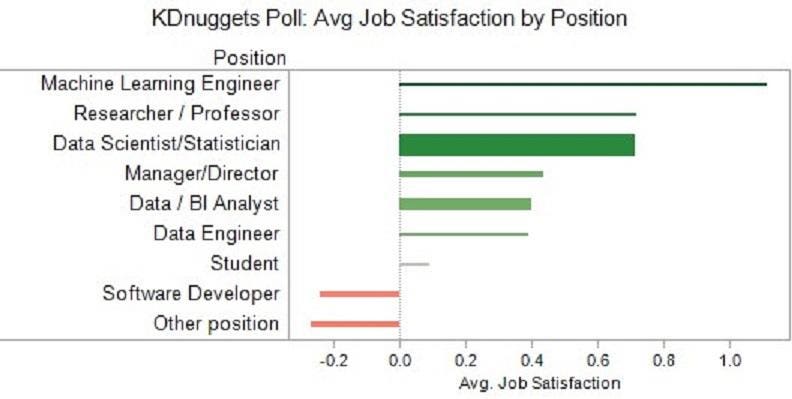 Burtch Works reports that they see a shift in job requirements toward machine learning and AI skills: “Now that many teams have grown, the need for generalist ‘unicorns’ has given way to a higher demand for data science specialists that can work with other analytics professionals and data engineers on the team. For example, we now regularly receive requests for experts in specific areas such as NLP (natural language processing) or image processing using tools like TensorFlow.”

AI specialists already command super-sexy salaries and the latest in machine learning and artificial intelligence is being added to data science training and career transition programs such as Insight Data Science. And so goes the cycle of evolving disciplines and job categories, all attempting to improve the methods and tools for data analysis and for finding new uses for computer-generated data.

This post is contributed by the Burtch Works Data Science and Data Engineering Talent Advocate teams.  To measure the hiring… END_OF_DOCUMENT_TOKEN_TO_BE_REPLACED

Welcome to Burtch Works’ Monthly News Digest, your go-to source for a comprehensive overview of the month’s most significant stories… END_OF_DOCUMENT_TOKEN_TO_BE_REPLACED

Culture. It’s a word that’s thrown around a lot in the corporate world, but what does it really mean? For… END_OF_DOCUMENT_TOKEN_TO_BE_REPLACED

Are you ready to know what the future holds for data science and analytics? As we enter 2023, the advancements… END_OF_DOCUMENT_TOKEN_TO_BE_REPLACED

As AI technology continues to advance, it’s becoming more common for job seekers to turn to AI tools, such as… END_OF_DOCUMENT_TOKEN_TO_BE_REPLACED